For which rental device do you need support?

You don't have a rental contract with printer4you.com?

Here you can instruct us to repair your printer without a contract: Continue with your order →

You want give us feedback to this page?

Do you really want to delete?

Can I really print from anywhere?

Smart-phones and tablets are just like the computer nowadays and are core devices for every company and almost all private households. Tablets in particular make the work in companies increasingly flexible and mobile.

Thus, the requirements for the networking of the various devices, such as the printer, are also changing. Printing from a smart-phone or the tablet is no longer an impossibility but in many cases it is still a problem, as it requires certain prerequisites.

Here we would like to give you some basic information about mobile printing: 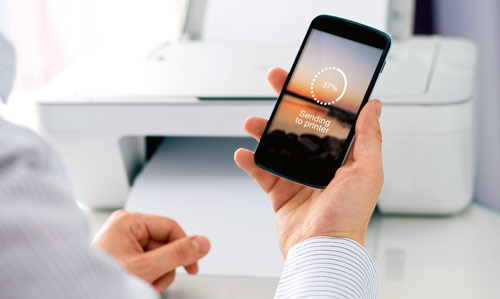 This is an epitome for a number of HP technologies. An ePrint printer is usually defined by its ability to print emails and attachments sent over the cloud from mobile devices. Each ePrint printer has a unique email address to receive print jobs directly to (without rerouting via a computer).

Security is ensured by randomly generating e-mail addresses for ePrint printers. If the address of a printer is not known, it can not be printed from. The owner or administrator of the printer can also maintain access to the printer via a whitelist of authorized users.

When printing with ePrint on a local printer - for example, in the same room - the print output may take longer than a direct connection. The email containing the document to be printed is sent to the cloud, rendered in the HP ePrint centre, and then sent to the printer for output. EPrint's options for print output are minimal, with little impact on the size of a printed image and on the number of copies to be printed. One copy per e-mail is printed.

Under the same concept, there is ePrint WLAN direct printing, which provides many of the same possibilities as with WiFi Direct.

HP has worked with Apple in the development of AirPrint, so that HP AirPrint is a part of the ePrint family, although Apple would certainly have a different view.

This technology was introduced in 2010 to address the problem that some Apple mobile devices were unable to print documents on printers. AirPrint connects an OS X computer or iOS device with a wireless printer over a router in a wireless network. There is no direct connection between the device and the printer.

The main advantage of AirPrint is that you do not need to install drivers for a specific printer before printing. As long as the printer is compatible with AirPrint - almost all HP printers and many current models from Brother, Canon, Epson Konica, Kyocera, Lexmark, Oki, Ricoh, Samsung, Sharp, Toshiba, Xerox and other manufacturers, can print out of the box.

If you want to print, the mobile device displays a list of the printers that the mobile device is currently able to "see". Once a file has been selected, which can be an image or a document, it is sent to a printer via a router. Printing options are offered to some extent, depending on the application that provides the AirPrint print function. These are generally similar to those provided by ePrint.

It is also possible to connect a mobile device with AirPrint to some wired or non-AirPrint wireless printers, so long as they are connected to the router and can therefore be accessed by the Apple device.

This technology has been developed under the Wi-Fi Alliance, a group of hardware and software vendors such as HP, Intel and other chip manufacturers. It is designed to simplify the connection of Wi-Fi Direct devices and communicate with them directly, rather than using a router as a switching entity.

The technology includes the Wi-Fi Protected Setup (WPS) standard that allows you to connect two devices with either a named key on one of them or a PIN on one or both devices. It is easier to connect by WPS compared to setting up Blue-tooth pairing.

The WPS set-up process for a Wi-Fi Direct connection is a fairly easy procedure. However, in an office where multiple printers of the same brand and model are within range, the selection of the right printer may become more difficult.

Near Field Communication (NFC) is a technology that is increasingly being used in the printing environment.

A passive "tag" is implemented in one device and an active transceiver in the other device. Between both, communication takes place using radio frequency identification (RFID). By placing a mobile device close to a printer or touching the transceiver of the printer with the mobile device, a transfer of the file to be printed is initiated.

The Wi-Fi DirectLink is then activated for one-time printing without the need for a login or pass-code.

NFC can be used with other technologies such as Blue-tooth but it is likely to be Wi-Fi Direct for the transfer of the printed file.

Although the wireless connection from mobile devices to printers is currently a bit of a mix bag of different experiences and technologies, the technology is being gradually improved. Protocols such as WPS Set-up and NFC can help create adhoc connections with just a few keystrokes.

In order to process the print data, external services, which are offered by their providers as cloud services, often have to be used. In the private sector, this is hardly a problem, and in most cases it is practised with relative ease. However, this is a major problem with regard to IT security concepts in companies, and above all, for or within public authorities. For data protection or security reasons this option is not suitable for most companies and public institutions.

What technical requirements exist in this context?

Various options can now be used to enable print output from a mobile device:

The data to be printed is transmitted by the mobile device via a mobile connection or directly in the corporate WLAN via email to a mailbox of the company's mail server, and from there to a print service in the company network

This print service processes the data and then prints it to a printer.

This can also be linked to security features such as the previous release by PIN on the mobile device, and also to the output of the Follow-Me print queue , from which the employee can pick up the print job after authentication.

Many printer manufacturers offer the possibility to output a direct print output via a WLAN via an app to a printer that supports this function. The printers can either be accessed via the corporate WLAN, which means that the mobile device must also be located in the corporate WLAN. Otherwise, a direct wireless connection between the mobile device and the printer is required, which is referred to as the Wi-Fi Direct connection, as the connection is achieved without an access point or a hot spot. The devices themselves function as a wireless base station. Wi-Fi Direct is not just used to connect smart-phones and printers, but also to connect digital cameras.

Do you want to know more about mobile printing?


What our customers say

Looking for a tool to manage and save money on our printer landscape, we at TransRegina came across printer4you.com. Above all, the graphical presentation with numerous technical details impresses.

The storage of toner and other supplies for our printers is very convenient. Needed supplies can be ordered with just a few clicks - even without a contract.

Thus, we now have a clear, transparent view of the actual print volumes for individual cost centers.

I was able to enter my printing requirements and received very fast, uncomplicated and exact suggestions, that I found suitable.

For me, the portal is a great help to find the right printer, the associated consumables, and support in case of problems.

The shopping cart has been updated.

There currently are no items in your shopping cart